The Genesis and Metamorphosis

Very closely associated with the beauty of the mountains are some special emotions which the highest and wildest peaks provoke. I feel a special excitement when I look out over thousands of square, miles of untouched country. I feel it again when I walk where only a handful of men have walked in, the history of the world, when I explore some hidden ridge or crag, or when I make the first track across a great unbroken snow field. Again I feel a special excitement to be alone in the high silent places of the world tucked close under the sky. Such things are worth a little insecurity and sacrifice.
Speaking of aloneness, this brings up two other important values which I find in mountain climbing solitude and companionship. Paradoxically the mountains provide both.
The companionship provided by climbing together is almost universally valued by mountaineers. The friendships established are lasting and irreplaceable. When you have walked the feather edge of danger with someone, when you have held his life at the end of a rope in your hand, and he has later held yours, you have an almost impregnable foundation for a friendship. For the deepest friendships spring from sharing failure as well as success, danger as well as safety. There is really no substitute.
Indeed, this is one of the regrettable trends in our present civilization. Real friendship is increasingly - difficult. _How often do we see even our best friends? Once a week? Less than that? If we hardly see them, how can we really share joy and tragedy with them? I think men are made for a deeper sort of friendship. If they miss it, they miss something very important in life. Men are made for the close warmth of a friendship tested in danger and adversity.

I hope they understood what I wanted to say.. I knew they would.. There are too many things I want to do before Death comes.. But I don’t feel like doing it alone. Maybe I wasn’t made to do anything alone. Maybe I haven’t yet like above. Only the time can test such bonding between two people and when it does test , it would probably be a time when one of them lost something .. something important..

Last night while trying to persuade Ranjit to watch RDB (he doesn’t believe there can be such friendship between two people), we came to talk about the physical damages which we had inflicted on people.. of course unknowingly.. he had cause a hand fracture in some one.. and I had cause a split upper lip I Ritesh Mehta.. Ritesh Mehta - a guy who was always prone to getting hurt.. his face is all covered with scars left by cuts and bruises.. Ranjit tried to explain that by saying that some people just don’t have the basic body defense mechanisms in them..
The next morning it made me think that if the body’s defenses are anything important.. it would probably prevent people from doing things which might hurt them.. things which seemed right on impulse but after spending a long time thinking on it seemed to be a bad idea.. A fire which if started needs fuel.. just like a impulsive thought in a man to do something about some wrong done to him.. even though he might perish trying to fight against such injustice. If prevented from being impulsive, he would have more time to think about the consequences of his actions and his body’s self defense might render him to not carry out his plan once he is released. This would douse the flame which burnt in him initially. It had no fuel to burn on anymore and hence it died out. That’s what spending time in jail did to revolutionaries (“political prisoners “). But Azad and his friends kept chanting slogans and hymns of victory against injustice and that kept their fire burning brighter and stronger than ever… it allowed them to sacrifice themselves without hesitation for a cause which was greater than themselves. Maybe to achieve something larger than life you needed to be willing and able to give up life itself.. If it wasn’t for impulse, no kind of revolution could have ever happened. Impulsive action (shooting the archbishop) started the World War I (??) and has also caused may people to commit suicide and do other bad things.. but impulsive ness is also necessary to bring about a change for the good…
Coming to one last thought today.. before I make Deepti read this.. she is the only one online now who would understand all this..
Gandhiji once said “ why doesn’t man feel good to see another man?”.. well we should flourish peacefully and so this is probably the right question to ask.. but having seen just too many star trek episodes.. I think the better question to ask would be “Why aren’t we proud enough to be alive?.. why don’t we just feel good to be alive?” forget being an Indian; forget being an Asian; forget being a human even !Just be happy to be alive…
One last thing that came to my mind is what Mr B Shailendra Said to Saurabh today: “ Degree (as a proof of capability) is something only those people want who don’t want to work.. people who want to don’t care about it“ This is exactly my philosophy … just amazed to hear it coming from seemingly the most improbable person to say that.. maybe I didn’t understand this guy well enough.. He said something which is comparable to another piece of wisdom which I think of as the greatest and the best guiding advice ever:

Well well well……….it really was quite a special day for me as I had the pleasure to have all of anurag’s attention for a change……….and instead of me hitting on him, he seemed meherbaan on me…………guess the 2 aurat’s influence is waning finally.

The reason I am adding on to anur’s already long account is becoz he seems embarrassed to write all the very romantic things that he said……for eg,

Finally he wrote out “kirti” on a sticker and said he would stick it on his t shirt near his dil………talk about mushy……….

So yes it was an unconventional day becoz for a change, I was getting wooed and to confess, it felt rather good.

But then I do know that anur’s attention is going to be rather shortlived and his new found affection for me will soon wane ………… becoz I really think I wont b able to match the 2 auratein……………..

Yet I will cherish my only romantic evening with anurag…………kya pata …….kal aisi khushi mile na mile. 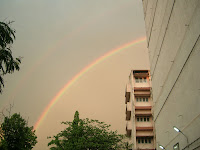 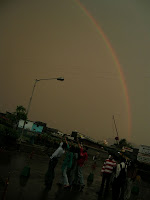