August 06, 2010
Here's a list of projects I have collaborated on with Prof. Dhananjay V. Gadre (In chronological order):

Prof. Dhananjay Gadre and I have been in touch ever since I emailed him after reading this article which appeared in May 2005 issue of EFY: 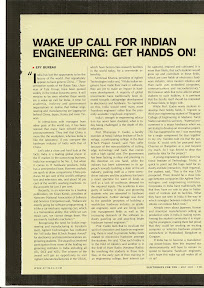