July 27, 2016
During my 2 year long Teach For India fellowship, I designed and delivered 2 interesting courses. The first one was centered around "self" and the other was to do with "technology". Like everything else at TFI, these courses took root when I asked myself certain questions. These courses were my answers to these questions. The "Big Goals" course was the one centered on self where I tried to come up with a better question that "What do you want to be when you grow up?"

I have often wondered why do we ask little kids what they want to be when they grow up. Little kids keep changing their minds all the time - astronaut, scientist, footballer, dancer, teacher etc. And older kids set them up for disappointment if they fixate on one thing and aren't able to achieve it later on in life - think IIT and MBA aspirants, competitive exams, pressure of studies and in some cases even suicide.

There was something amiss in trying to inspire long term thinking through the question "What do you want to be when you grow up?". Maybe there was a better way to go about it, maybe there was a better question I could ask. I was sure that it had something to do with "Access and Exposure" (one of the three rungs of TFI's Student Vision Scale) but the right question to ask eluded me for the longest time. I had a bunch of 118 eight graders that I was responsible for and few ideas on how to keep them motivated to study and strive.

Then one day during one of the Phase III meets at American School of Bombay, I noticed the latest issue of Imagine magazine on one of the racks. This magazine published by John Hopkins Center for Talented Youth and features stories of high achievers. Most of these stories were 2 pages long and were biographical accounts written by the authors themselves. Whether they were written by high school students or researchers featured on TEDTalks, all the stories had a similar flow:


The best way to learn how to do anything is to copy others. I wondered if I could use these stories as read aloud passages in my class and maybe my kids would be able to copy the thinking patterns of the authors in trying to zero in on their own passions. And so I set to work. I went to Imagine magazine's website and downloaded a few articles, read through them a couple of times and made a list of RC questions to go along with the articles. Some of the articles were:

Not all of the stories were by scientists. There were stories by artists, sportsperson and dancers as well. Needless to say the RC articles were a hit in the class. I integrated these sessions with the few other sessions that we (School Team - Kashish and Kanika) had already executed under the "Big Goals" brand in my class. The sessions I had covered earlier spoke of KIPP Values, colleges and such. After I had read out enough stories with the students in my class, I decided to now work on getting them to think about their own passions - their own world problem that they would like to solve. And so during one of the sessions I handed out worksheets that looked like these:

Soon I had gotten almost all of 118 students's responses. I set to work on turning the responses scribbled on those worksheets in to posters titled "Mission Cards". These personal posters feature their skills, values and possible career paths. I would plaster these posters all over the walls of the class for next year before the new fellows stepped in. Whenever the kids exhibited any of the values, or developed any of the skills mentioned in their posters, their teachers would give them a star next to the said value/poster. This would trigger their internal motivation to keep striving on. I even got them to write letter to their ex-fellow about their life's mission - got them to stick a stamp on it and post it to him (I had observed that the kids had never posted a letter in their lives). Here are some of the mission cards: 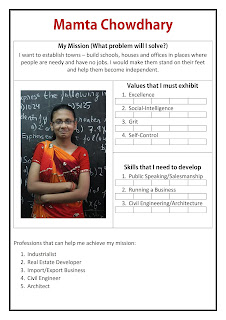 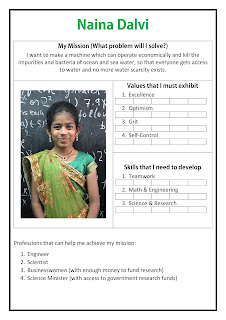 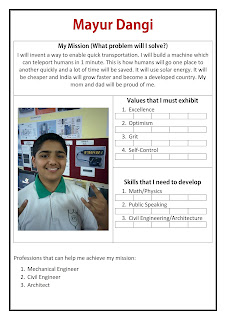 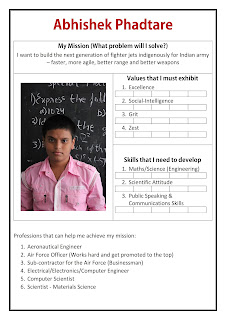 As you can see, each kid now has a list of diverse professions that he/she could take up to reach his/her goal. So, Asha who wants to "eradicate cancer from the world" could become a doctor and help patients directly or become a molecular biologist working to discover new drugs or even a businesswoman who sponsors cancer research. Being queasy at the sight of blood is no longer going to stop her from contributing to the problem that she wishes to help solve.

Here are a few slides from the overall Big Goals Sessions of which "What problem will I solve?" session were a part of . 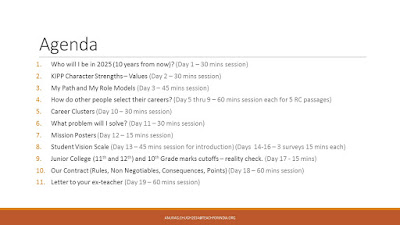 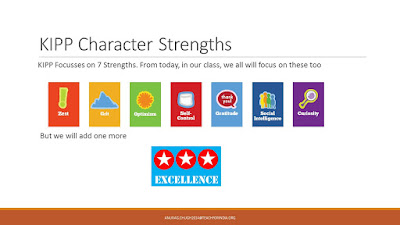 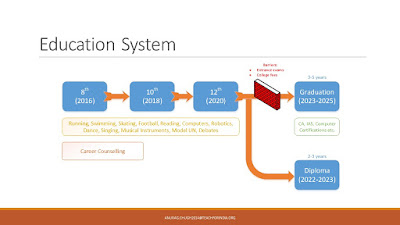 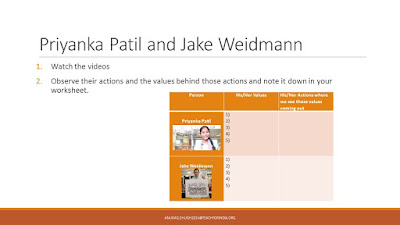 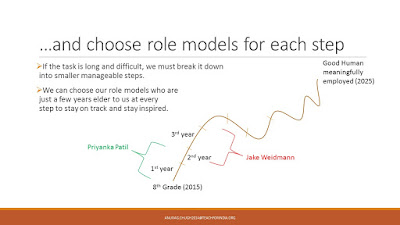 As a part of the Big Goals sessions we also use Optical Mark Reader sheets to conduct an in-class survey where students rated each other on a scale of 1-5 according to each rung of the TFI's Student Vision Scale. What resulted in was a matrix of 118 x 118 x 3 data points. We used an OMR reader software to collate the data. This gave them some tangible inputs as to how they could improve themselves in the months to come and better align themselves with their visualized life journey. Not only that, but the classmates would now be invested in each other's growth as well. The survey provided us with solid data that we would use to establish what the whole bunch thought of particular kids. We would redirect all our counselling efforts towards that kind in order to help him improve himself/herself. 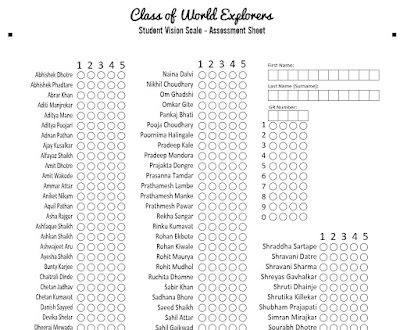 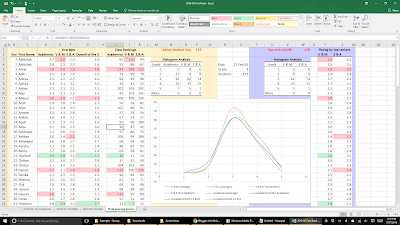 Isabela Dos Santos's article "Accidental Animator" in Imagine magazine inspired one of the kids - Pradeep Kale - to shoot his own stop motion movies. I gave him a camera and soon shot a couple of stop motion animations steadily improving his craft with each successive one. Here are two of his videos: