AVR Workshop at VESIT – A Report

September 07, 2006
The Electronics and I.T. Departments of our college had organized a workshop on Embedded System Design Using AVR Microcontrollers. The workshop was held on 1st, 2nd, 3rd and 4th of September. Professor Dhananjay Gadre from NSIT Delhi was invited to conduct the workshop. 45 Students attended the workshop.

Professor Dhananjay Gadre is a certified AVR Consultant and has written a book on the subject together with numerous other articles in various magazines. It was one of these articles that prompted me to contact him via email. From then on I have in constant touch with him. I had let him know about Robocon and how our college had been faring in it over the years. Since he was in Pune at the time of the competition this year, I invited him to look at our robots during our stay at MIT, Pune.

He met our guide Professor Abhay Kshirsagar and it was then that the idea for conducting the AVR Microcontroller Workshop came around. On returning from Pune we immediately set towards organizing the workshop. Professor Gadre has quite a lot of experience in holding such workshops so organizing it was a breeze. We were constantly in touch with him via email and phone. He had developed 2 kits for such workshops and had agreed to bring those for the participants to work on. 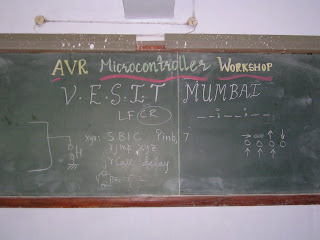 The following are the details of the workshop:

On the first day Professor Gadre taught us the basic principle of designing an embedded system. He threw light on the various constraints which a design engineer must take into account before designing a system. He started right from enumerating the differences between a microcontroller and a microprocessor and went on to speak about topics like Real Time Processing and Hardware/Software Partitioning which lie at the core of the subject. He made the atmosphere lively by sharing anecdotes and practices followed by the industry in this field.

After the Tea break, the kits (PCB and components) were distributed. The participants were divided into groups of 3 each and each was assigned the task of soldering a kit. The idea behind getting the students to solder the kits themselves was to let them get the feel of the microcontroller system before they went on to program one. The whole exercise took on a totally different track when all of us soldered the wrong resistors on the PCB. From then on it was what one would call an “Organized Chaos”. Students had to get on to de-solder the wrongly placed components and put in new ones in their place. Such an incident helped the students become more aware of the problems which one might face when creating an embedded circuit and how they could prevent those by carefully paying attention to each step involved in the process.

In all, the first day turned out to be a fun exercise. 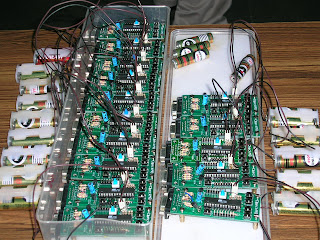 Professor Gadre spoke about the features of AVR Microcontrollers. He also spoke about the instruction set in brief and at the end he assigned us the task of controlling the brightness of LEDs using the technique of PWM by writing a simple program in assembly language. Some of us completed this exercise on the same day while the rest of us were successful in doing it by the start of the next day. 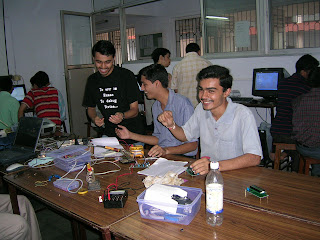 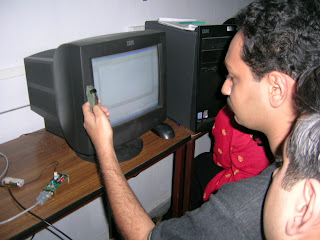 In the morning we took Professor Gadre to Lamington Road where he bought some components for future workshops. On returning back for the workshop, he explained more about the AVR Microcontroller series and the onboard resources available on these microcontrollers.

He explained about implementing serial communications by giving us an example of how one could design a system similar to the voting system used in the television programme “Kaun Banega Crorepati”. The idea was to use the RS-485 Communications protocol to carry out broadcast and unicast commands on the same network. 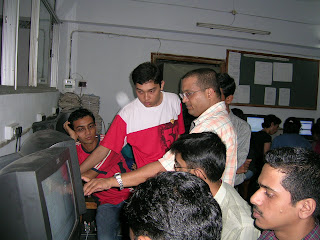 After the tea break we made a list of projects that we would make for presenting on the Technology Day. Each group was assigned a project and we set to work on them.

We spent the whole Sunday completing the projects which we had taken up. At the end of the day, all of us were successful in finishing the project with much time to spare.

At the end of day 4 we had a photo session before the official end of the AVR workshop. We thanked Professor Gadre for spending his valuable time to teach us the basics of the AVR Microcontroller. 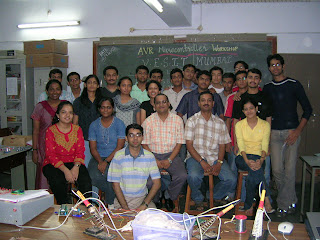 On the Technology Day we presented our projects to the college staff and students.

The projects which we had made during the workshop were:

We received an overwhelming response from the staff and students. The first year students were particularly enthusiastic in getting a first hand look at such projects. We told them how they could go about making such circuits. We promised to provide them help in the future for organizing such workshops and any projects that they may want to take up.

In all, the AVR workshop has been a pleasant experience and we have learned a lot from it. Thanks to Professor Gadre’s insight and experience, we were able to achieve more than we could imagine. Due to lack of space, we could only allow the fourth year students and the VESIT Robocon 2005 Team for this workshop. We hope to hold such workshop again in the future for the second and the third year students also.